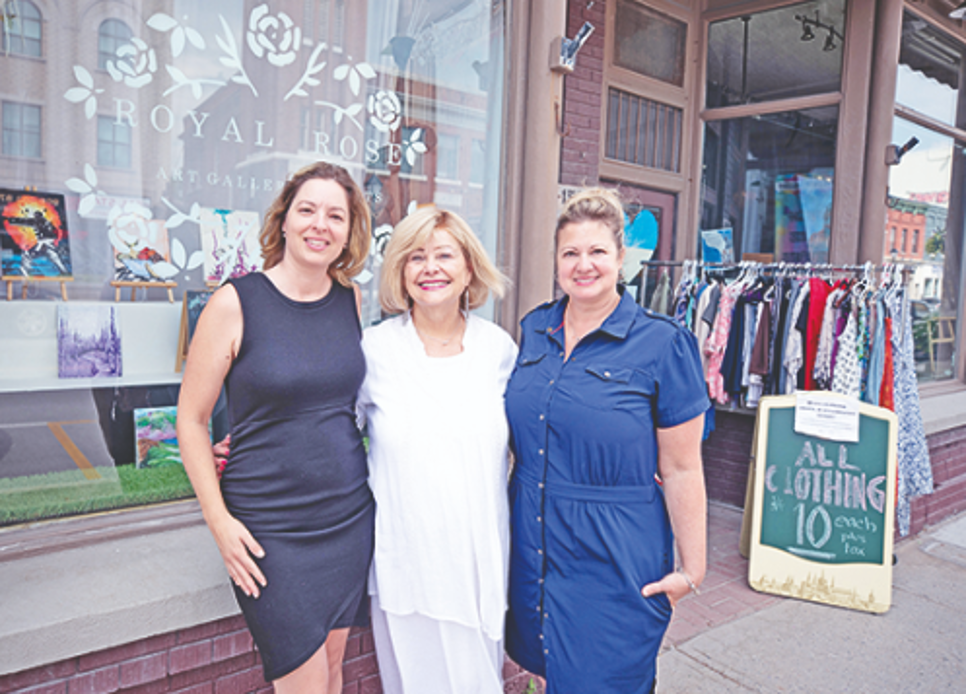 ‘Best kept secret’: Everything at the Royal Rose Gallery’s Hope shop on Yonge sells for $10

Local women will be able to expand their fashion dollar while supporting women and children fleeing violence in the future, thanks to an ongoing partnership between the Royal Rose Gallery and Abuse Hurts.

The Royal Gallery of Roses. which lent part of its space on Yonge Street, just south of Wellington, for a pop-up store to benefit the Newmarket-based nonprofit last April, announced last week that it had extended the partnership with ‘a year.

“The support from the community has been so overwhelming and they have dropped off so many clothes and donations that it only made sense to continue and help Abuse Hurts for all the good work they do,” said gallery owner Rosa Calabrese. -Teal. “The community, as a whole, loves to give back and support the [and] the charity being local and doing such a good job really motivates people to get involved and it also helps with the fast fashion crisis where people don’t necessarily want to go to the mall and they don’t want to buy a room they’re only going to use once.

“With the donations, many items are brand new with the tags on and [patrons] feel better buying it and supporting a good cause at the same time.

For the duration of the Hope Boutique, located on the north side of the gallery in the space occupied for more than a century by Caruso & Company, residents can donate their clothing directly to Royal Rose, who have to operate the store, while customers can pick up new and lightly used duds without a single item costing more than $10.

“The Royal Rose Gallery has offered to basically run the store for us where we get the profits, which relieves us of the administration and helps enormously,” says Ellen Campbell, Executive Director of Abuse Hurts. “Apart from the sales, which certainly help, the store has really given us a lot of notoriety.

“I’ve said it before, but we’re one of the best kept secrets. When a woman walks into a store and everything is $10, she doesn’t walk out with just $10 worth of merchandise – no one walks out with just one $10 item. The store really depends on donations from the community because that’s where the clothes come from. As customers come in, they also bring in donations of their own clothes, which we need to keep the store running.

“As fall approaches, we’re looking for more fall clothes, jackets, sweaters, boots, and other things of that nature,” says Calabrese-Teal. “We’re also running a contest, so if you donate by the end of August, you’ll have a chance to win a $100 gift certificate at shops in downtown Aurora.”

The Hope Store is now able to put down more solid roots in Aurora Town is another success story in Downtown Aurora, one in which the Downtown Aurora BIA has proven key, says Lisa Hauz, Director of Economic Development for the City of Aurora and Council Representative on the BIA Board.

“We are really excited that the revitalization is happening organically, like what is happening in the gallery and with the shop, especially the support of the mayor and council and all the movers who support the town centre,” says Hausz. “We’re seeing a lot of our contractors really seeing a great response from the community, the city, the BIA, and even the Aurora Economic Development Corporation. [which] has a downtown focus and the community is responding to this focus.

“From what we have in place, from support and setting up marketing and promotions in the town centre, not too long ago local artist Corrie Clark was painting vacant storefronts and that’s just not the case anymore. The buzz is happening downtown and it’s great to see.

Part of the buzz, she adds, includes a shift to more vintage options in the community, including a vintage pop-up located inside the Replenish General Store, just across the street. .

“It’s a unique way to drive traffic towards vintage, recycling, renewable energy and eco-friendliness,” says Hausz. “I can’t wait to see where it takes in the future.”