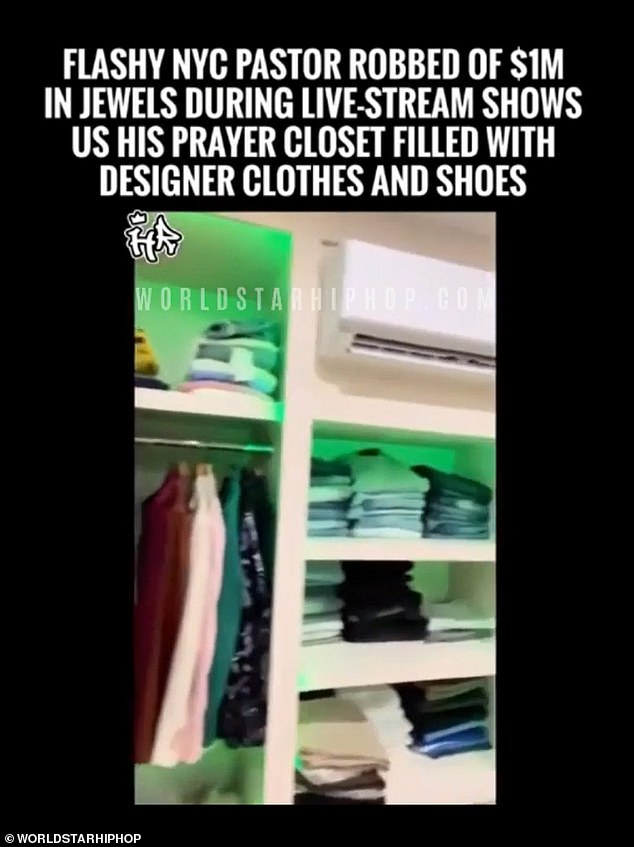 Lamor Whitehead showed off his thousands of designer clothes in live video, weeks after he was robbed at gunpoint

More than a week after he was robbed at gunpoint by three guys while broadcasting a sermon live, a Brooklyn bishop has shown off his huge wardrobe full of fancy clothes and shoes.

On July 24, while the pastor was addressing his congregation, two guys broke into Leaders of Tomorrow International Ministries in Brooklyn, New York, and robbed him. However, it seems they only managed to escape with a small portion of the pastor’s belongings.

“Hello, good afternoon, everyone,” Whitehead said in the video while donning a white beanie and sweatshirt. Bishop Whitehead here; allow me to take you to my prayer room.

Whitehead then gives a side perspective of his “prayer closet” painted white and lime green. The walls are lined with clothes racks, while the floor is covered with intact boxes and unopened bags of clothes.

“You’d think ‘wow, look at your closet,'” he said, taking a closer look at his designer clothes.

‘I have all my priestly robes and more. Designer coats, you name it – Gucci – Louis – you name it. Fendi, you name it,’ he said before turning his attention to the unopened boxes and bags of clothes on the floor.

“No more coats,” he said before heading to an isolated section of his closet for his shoes.

A robbery took place at Whitehead Church before the footage was recorded. The preacher delivered his sermon to his audience on July 24 while wearing a brown suit, a heavy gold chain and a waist ring on each finger.

Before the armed guys arrived, Whitehead was seen on camera asking his congregation, “How many of you lost your faith because you saw someone else die?”

The thieves then approach, and he is then heard repeating, “It’s alright, it’s alright”, before being seen kneeling. Then, as they loot the bishop, his wife and the crowd, the men can be seen circling the scene.

Later, Whitehead informed his social media followers that his congregation, as well as his baby girl, were now “traumatized” by the event.

On Instagram, he described what happened on Sunday, saying the robbers pointed a gun at his back while stealing his Episcopal cross and the jewelry he wore above and below his shirt.

I asked everyone to come down, Bishop Whitehead said. I didn’t know if they were planning to rob the church or open fire on it.

They took away all my jewelry and my wife’s jewelry.

The cleric also said that while pursuing the criminals, he saw them take off their masks and flee in a white Mercedes.