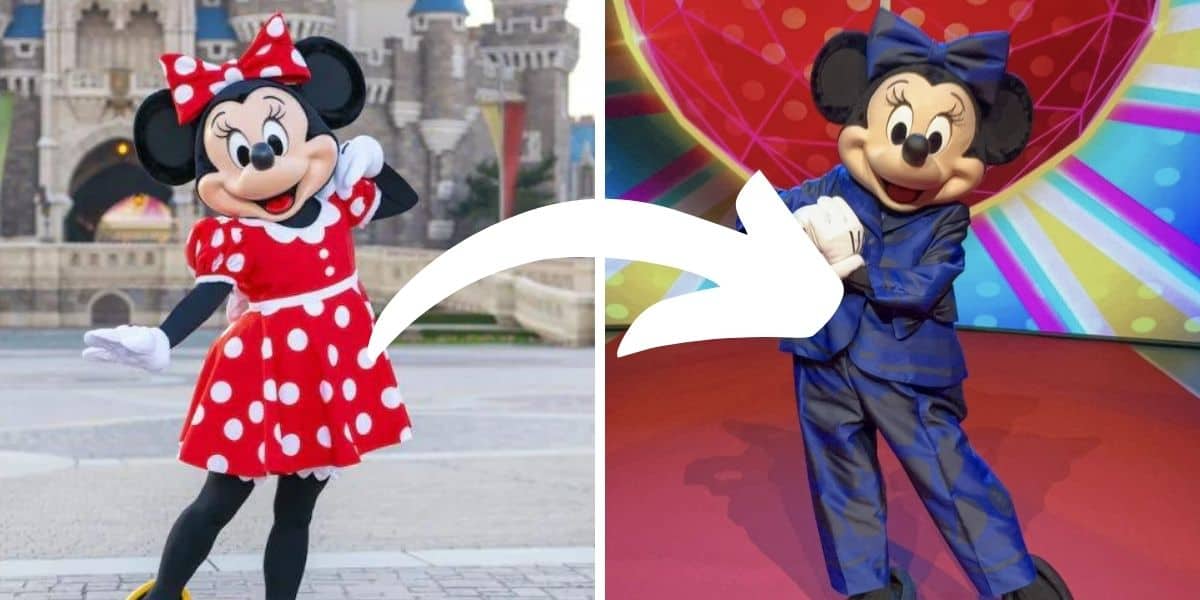 As announced a few weeks ago, in honor of Women’s History Month, Minnie Mouse will debut a new signature look as she rocks a polka dot pantsuit.

And today is the day we finally get to see Minnie’s new pantsuit in person.

A few weeks ago, we reported that in honor of Women’s History Month, at Disneyland Paris, Minnie Mouse would be ditching her signature red polka dot dress and instead wearing a navy polka dot pantsuit. , designed by Stella McCartney.

And we’re thrilled to announce the first ultra-chic pantsuit for Minnie Mouse at Disneyland Paris, designed by Stella McCartney herself. In honor of Women’s History Month, starting March 6, 2022, find Minnie Mouse at Walt Disney Studios Park as she wears a new take on her signature polka dots. As part of International Women’s Day, Stella McCartney will release a unique Minnie Mouse t-shirt available exclusively online and in Stella stores on March 8, 2022. Starting Spring 2022, a line of limited-edition products inspired of the cult film Fantasia will also be launched by Stella McCartney.

And now, thanks to DLP Report on Twitter, we can see how gorgeous Minnie looks in her new pantsuit. Shared DLP report:

📍 Catch Minnie in her Stella McCartney-designed pantsuit from today until the end of the month at the Studio Theater continuously from 1:10 p.m. (last set today at 7:05 p.m.)

📍 Catch Minnie in her Stella McCartney-designed pantsuit from today until the end of the month at the Studio Theater continuously from 1:10 p.m. (last set today at 7:05 p.m.) pic.twitter.com/r6ji9uweMt

DLP Report has shared additional photos of Minnie, who is currently meeting guests in her new pantsuit at the Studio Theater. They write:

📍 “Minnie Fashionista”, in her famous Stella McCartney pantsuit, now meets all the guests of the Studio Théâtre:

📍 “Minnie Fashionista”, in her famous Stella McCartney pantsuit, now meets all the guests of the Studio Théâtre: pic.twitter.com/zxKBWFgpSc

Minnie Mouse can be seen in her new navy pantsuit at Walt Disney Studios Park in Disneyland Paris.

Disneyland Paris recently joined more than 140 organizations and companies to sign the #StOpE charter, which sets specific priority actions to reduce sexism in the workplace.

The Walt Disney Company as a whole has been pushing inclusion for some time now. To reinvent Splash Mountain into a The princess and the Frog theme of having a gender-neutral dress code in the parks, the company has made multiple efforts to represent a more accurate representation.

We’ve also seen Disney Parks transition the welcome announcements Guests hear at various countries and attractions to be more accommodating to all Guests when entering theme parks. Instead of greeting guests by saying, “Ladies and gentlemen, boys and girls,” theme parks now say “Hello World,” moving toward a more inclusive statement that applies to people of all genders. You can read more about it here.

Do you like Minnie’s new pantsuit? Let us know in the comments below.