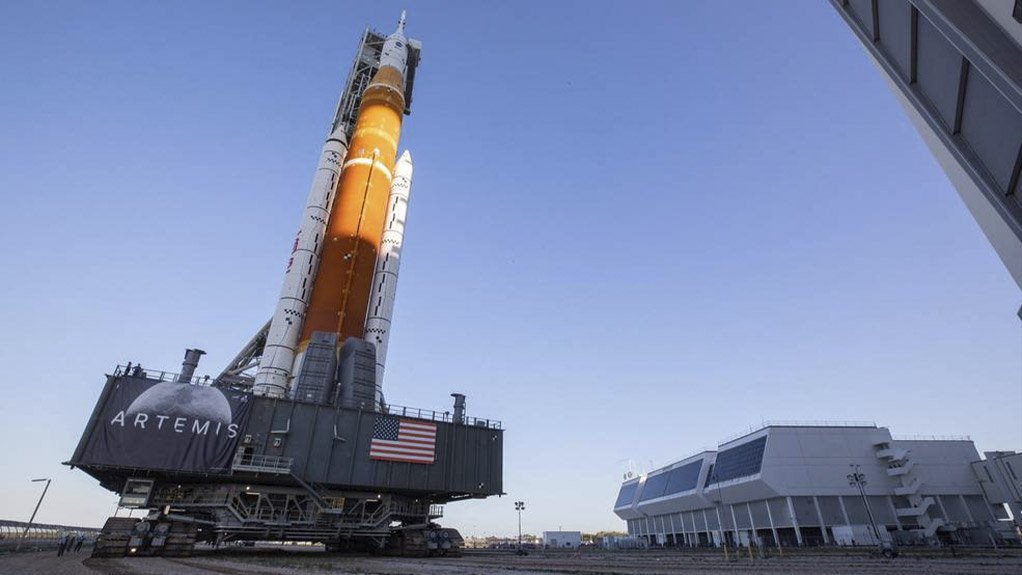 The US space agency, the National Aeronautics and Space Administration (Nasa), began the deployment, on its tracked carrier, of the complete Artemis I Moon rocket at around 06:10 South African time (00:10 US Eastern Daylight Time) on Monday, at from the Vehicle Assembly Building (VAB) at Launch Pad 39B, at the Kennedy Space Center (KSC, in the US state of Florida) for its next “wet dress rehearsal” test. The launch pad is nearly 6.5 km (four miles) from the VAB.

The Artemis I is made up of the Orion spacecraft and the Space Launch System (SLS) rocket. The first wet dress rehearsal attempt, in April, ran into a series of problems, apparently mostly with equipment and ground systems, forcing Nasa to shut it down and return the Moon rocket to VAB.

The wet dress rehearsal is a crucial step in the process of preparing the rocket for launch. During the test, the complete rocket is placed on the launch pad and the Artemis launch team goes through the entire process of filling the SLS tanks with nearly 2.65 million liters of cryogenic propellant (liquid hydrogen and oxygen liquid) and performs a full launch. countdown, practice launch procedures and deadlines. Power will be supplied to a number of spacecraft and rocket systems, as well as ground support equipment.

The launch control center will take the countdown just before the SLS main engines are turned on, then stop it and “recycle” the countdown to point T minus ten minutes, hold the countdown for one moment, then resume before stopping it definitively at T minus ten seconds. Subsequently, the propellant tanks will then be emptied. All of these procedures, including emptying the tanks, are rehearsals that will or may be required during an actual launch attempt. (For example: a glitch could force the launch to be “cleaned up”, or aborted, which would require the propellant tanks to be drained.)

A few days after the end of the rehearsal, the Artemis I will be brought back to the VAB. There, technicians will deploy access platforms around the SLS and Orion, remove sensors installed specifically to monitor the wetsuit rehearsal, charge batteries on the Orion and elsewhere, and perform final checks on multiple systems. . They will also stow “late load” cargo on the Orion. In parallel, NASA will review the test data and set a date for the launch of Artemis I, which will be an uncrewed test flight. However, the Artemis program aims to land men, and now also women, on the Moon again, and to carry out deeper space missions. The first mission to land on the Moon is expected to be Artemis III, whose crew will include a woman and a person of color.

I ordered a dress from the Shein clothing store for cheap