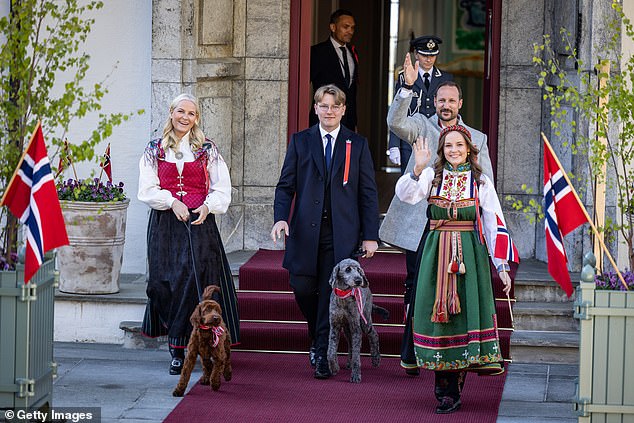 Crown Prince Haakon, 48, and his wife Crown Princess Mette-Marit, 48, alongside their two children Sverre Magnus, 16, and Ingrid Alexandra, 18, were pictured as they rode the marches from their Skaugum estate outside Oslo to watch a children’s parade.

Prince Haakon chose to wear a men’s bunad suit; traditional Norwegian suits with knee-high socks and white shirts, plus touches of red – which feature prominently on the country’s flag. 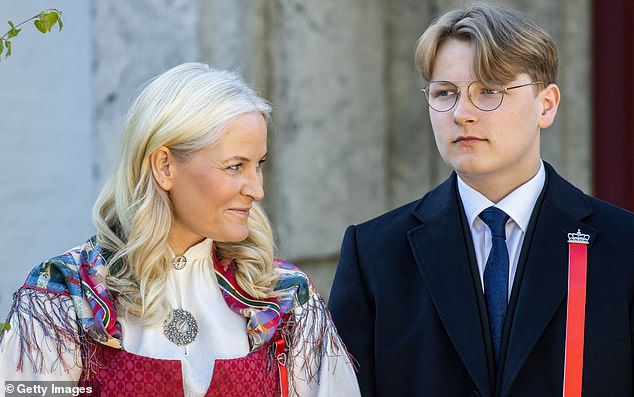 Crown Princess Mette-Marit (pictured, left) is the wife of Norway’s heir to the throne, Crown Prince Haakon. They share two children, here she is pictured with Prince Sverre Magnus 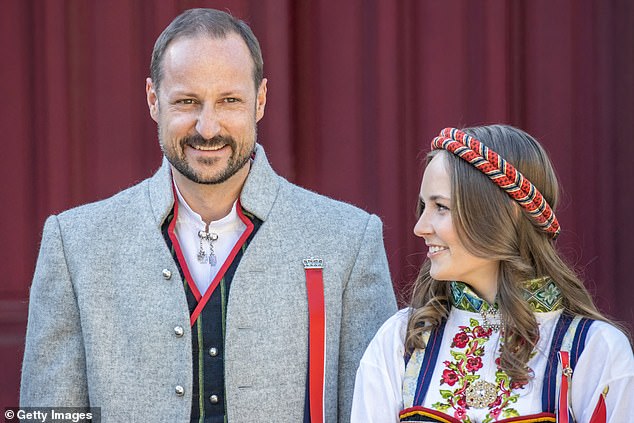 However, unlike the rest of his family, son Sverre chose a smart navy suit and blue tie, paired with sleek black dress shoes.

They were also accompanied by their pet pooches, whose necks were adorned with neckerchiefs in the red and blue colors of Norway.

The holiday, which is celebrated on May 17 each year, marks the signing of the constitution declaring Norway an independent kingdom in 1814.

The constitution declared Norway an independent kingdom in an effort to avoid being ceded to Sweden after the devastating defeat of Denmark and Norway in the Napoleonic Wars. 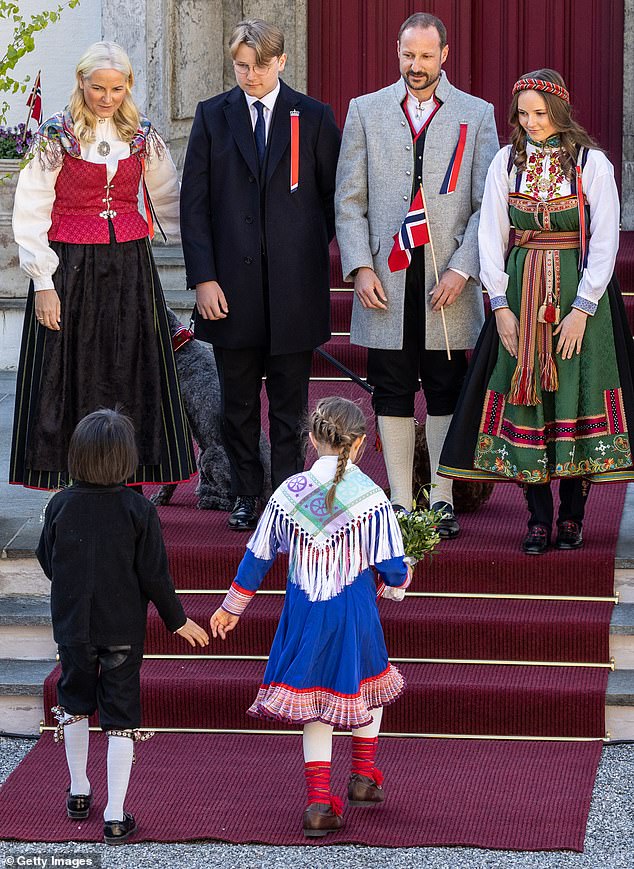 As part of the country’s National Day celebrations, the Royal Family attended a children’s parade, with two of the young participants meeting the family as they handed over a bouquet of flowers 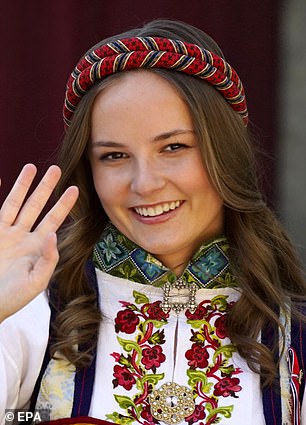 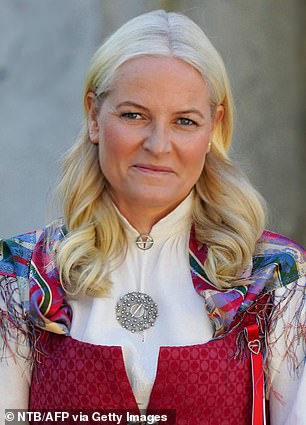 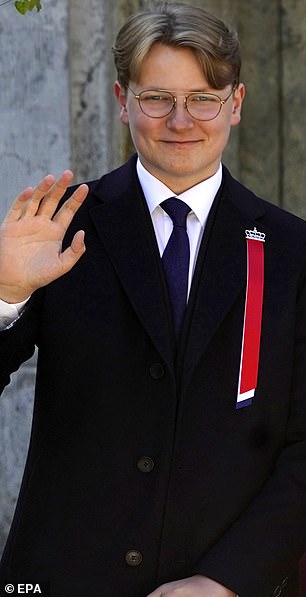 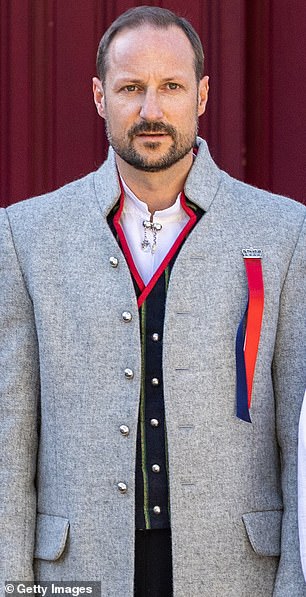 The royals also dressed up for the occasion, but 16-year-old son Sverre (pictured, left) chose a smart navy suit, unlike his family who wore traditional Norwegian bunads

The celebrations, which take place across the country, include parades as well as royal appearances where the family waves to crowds of the public.

Today’s royal appearance marks a return to traditional celebrations, which have been curtailed over the past two years due to the Covid pandemic.

Later in the day, King Harald of Norway and his wife Queen Sonja, joined by other family members, will take to the balcony of the Royal Palace in Oslo to watch another children’s parade. 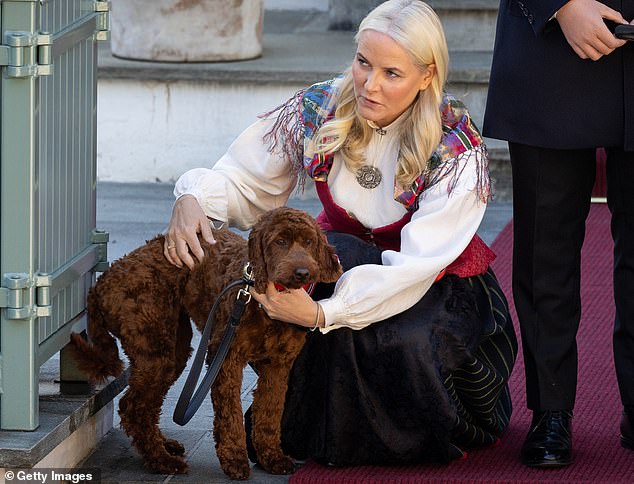 Even the family pets were dressed in the national colors of Norway, wearing red and blue scarves for their public appearance 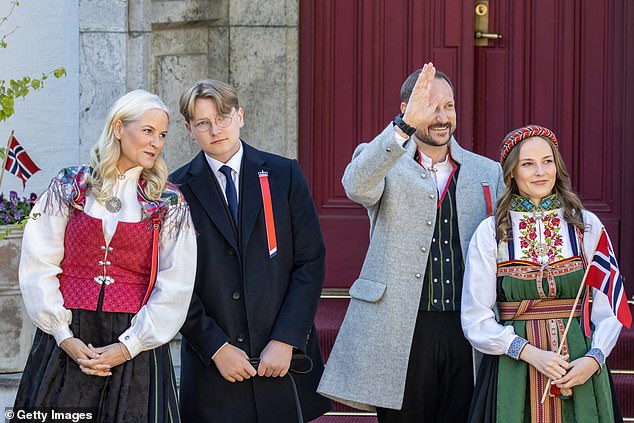 Princess Mette-Marit (pictured, left) also has an eldest son from a previous relationship, but he did not take part in the royal family appearance

Princess Mette-Marit’s eldest son Marius was not seen with the family for the celebrations.

At the time of her marriage to the Crown Prince in 2001, she was a single mother to a four-year-old son and is now a mother of three.

She has since become widely respected for her charitable work and served as a special representative for UNAIDS, an arm of the UN that focuses on the fight against HIV and AIDS.

She also joined the Norwegian aid agency NORAD as an intern and sponsors several Norwegian charities, including the Oslo International Parish Music Festival and the Norwegian Scout Association.