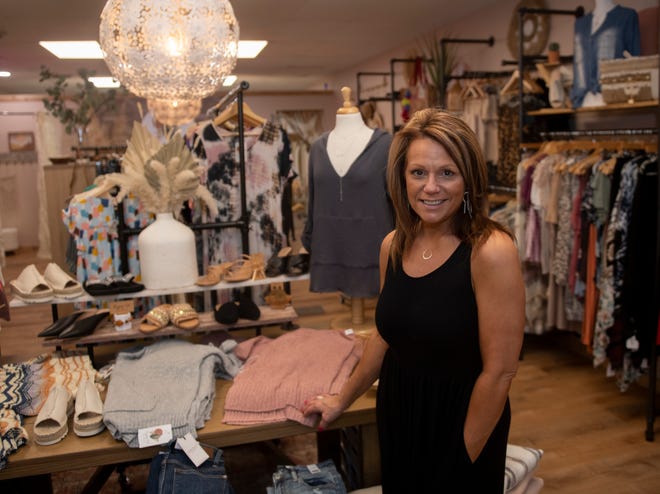 After leaving a 20-year career in healthcare, Jennifer Catanese wondered what she could turn to for a living. Her response was to create her own online clothing store.

After leaving health care, she wondered, “What can I do?

“I don’t want to go back to the hospital with everything going on, so I said, ‘I know how to shop, I do a lot,'” she said with a laugh.

Catanese’s experience in online clothing stores led her to believe that she could exploit her own.

With her decision made, Catanese said, she secured a loan and began stocking her online store, Gypsy Sol Boutique (not to be confused with the business of the same name in Chagrin), on August 5, 2021.

Recently, she opened a storefront at 225 S. Chestnut St. in Ravenna. Since then, Gypsy Sol’s activity has almost doubled.

The store is full of jeans, tops and shoes, many of which are not available outside of boutiques.

“Judy Blue is our primary denim,” Catanese said. “You couldn’t go to TJ Maxx or Macy’s and find Judy Blue.”

In addition to Bamboo shoes, Good Karma kimonos and You Had Me At Hello dresses, Catanese is working on introducing Myra Bags to the store.

Every Wednesday and Sunday night, Catanese takes the store live online to stream previews of the new clothes she’s stocking.

Most of the items listed on the store website and app are also available in store. Some items, such as candles and soaps, are only available in storefront. Catanese is wary of shipping fragile products to customers.

Cananese said she hears the same complaints from customers all the time: downtown Ravenna is a bit of a commercial wasteland. There are not many places to shop.

Being one of the few clothing stores in town makes her business unique, she said. What Gypsy Sol offers also sets it apart.

Shoppers can check out Gypsy Sol’s app, the best way to shop in the store, according to Catanese. Users will receive 1% of each purchase credited to their account for use on their next shopping trip. A link at the top of the Gypsy Sol website takes customers to a page where they can download the Apple or Android version of the app.

Since Gypsy Sol uses a service called CommentSold, all purchases must be made with a credit card. Any buyer with a CommentSold account can purchase something at one of Gypsy Sol’s live sale events by commenting “sold” under the item they wish to purchase. Catanese said most of its business — inventory, application management and customer information, for example — runs through CommentSold.

Returns are simple. If the store is at fault or something is damaged during shipping, there is a 100% money back guarantee within 14 days of purchase.

“But let’s say you buy something,” Catanese said, “and you just don’t want that size or decide you don’t like it later, that’s store credit.” Returns are rare, she added.

At first, Gypsy Sol only offered clothing, but they’ve expanded their inventory since opening on Chestnut Street.

“Say if you’re having a birthday party or something,” Catanese said, “you can come over here and get a candle or a bag, something that big for somebody so you don’t have drive to Summit Mall.”

Catanese is working on introducing a line of greeting cards to the store. The store also sells soap and bath products, and there are plans to introduce a range of skincare products.

Promotional offers are a part of any retail business, and Gypsy Sol is no exception. All last month Catanese held a Christmas sale in July and throughout August teachers get a percentage off the cost of their order.

Evening entertainment is also planned in the store, first on a trial basis, then more regularly if attendance is good. One idea Catanese has is to host something she calls a “Sip ‘N Shop”.

“If you wanted to throw a party and have eight of your girlfriends here for your birthday or something and go shopping, I’d make food and wine,” she said.

“Being here is great fun”

Catanese has a team of three who help run the store. Two of them, Andrea Collecchi and Angela Kohl, are her cousins. Her friend Stacey Brashier also regularly helps her.

“I never thought I would enjoy something like this, but I really like it,” Brashier said. “Being here is a lot of fun. The four of us get along really well, I love the customers, and in general – just being here – is my favorite part of it all.”

Catanese also loves his job very much. She is so excited to meet the people who walk into the store, some of whom are regulars at her online store.

Making her clients feel confident is important to her, she said.

“I work tirelessly to find clothes that you feel good in, that you love,” Catanese said. “I like women to feel good about themselves.”